The City of Madison was incorporated in 1869 and is located in Madison and Limestone Counties, in northern Alabama. Firefighting services were provided by volunteers utilizing bucket brigades and surplus military trucks, from 1869 through the 1940’s. In 1948, Mayor Walton Hughes purchased the first official fire truck and the Madison Fire Department evolved through city planning, water systems, and volunteer firefighters from 1948 through 1968. Madison Fire Department was incorporated in 1962. The first fire station was constructed on Sullivan Street just north of Palmer Road. In 1969 the City of Madison hired its first full-time career firefighter, Fire Chief Charles Wallace, who joined the department as a volunteer in 1964. Under Chief Wallace’s direction, the department merged into a combination career/volunteer agency in 1975. The Madison Fire Department became the first responder to all medical calls in 1976 and continues to be the leading authority on all calls for service within the City of Madison. In 1987, station 2 was designed and built on Hughes Road just south of Highway 72. Station 1 was moved into a new building located at the corner of Mill Road and Hughes Road in 1996 which provided more space for the growing fire department. Chief Wallace retired in 1999 after 30 years of full-time service plus 5 years of service as a volunteer. The City of Madison hired Ralph Cobb as the new fire chief in 2000. Chief Cobb served as the Chief of Madison Fire & Rescue until his retirement in 2016. Under his leadership, fire station 3 was designed and built on County Line Road just south of Highway 72 in 2003. In 2012, fire station 2 was relocated approximately one quarter of a mile to the south. In 2017 the City of Madison hired David Bailey as Fire Chief. Chief Bailey retired from Chesterfield Fire and EMS in Virginia after 35 years of service and served as the Fire Chief in Harriman Tenn. for a year prior to appointment in Madison.Today, the Madison Fire & Rescue consists of eleven day shift administrative personnel and 64 shift personnel whom respond to over 4,000 calls for service annually. 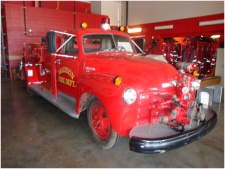